For those of you unfortunate enough to have yet to see the Manning Brothers ‘Football on your Phone’ video, climb out from under that rock and watch it.  The video, bordering on the fine line between hysterical and genius, was an absolute pleasure to watch.  I pretty much fell off the couch.  But what’s more important here, at least within the context of this blog, is the character of both men.  While I often talk about swagger and confidence being the keys to looking good for all men, these two, while absolutely hilarious on screen, are equally just as composed and calm off of it. 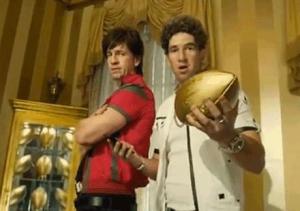 On the football field, their composure is top notch.  We can dress as well as we’d like, we can even fake swagger or confidence if need be, but the ultimate test is composure and calm under stress.  These two boys own it, embody it and personify it.  So should we.

As always, comments are welcome!